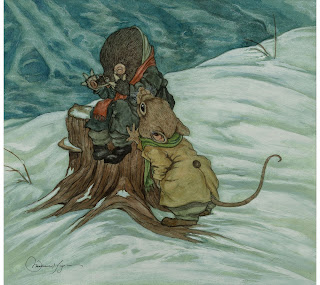 Just a quick post from me this morning in this rather busy but glorious season. A season in which this year I have decided to enjoy gently, in a peaceful and relaxed manner. The Christmas tree is humble in proportions and dressed demurely, the ostentatious lights will hibernate for a year. For me, the merest thought of decking the halls is proving too much and I’m already behind with cards and present buying so rather than the usual panic I’ve decided to tone it down and have come to the decision that that’s OK. Instead, I’ve found a few minutes to thumb through the pages of old favourites and steep myself into baths of warm, aromatic Christmassy prose and story.

I’m revisiting ACW’s Christmas anthology; recognising the pain in Dave Faulkner’s evocative Just Enough Light in the Darkness, smiling at Jane Anstey’s The Christmas Angel,  and imagining the sheep in conversation in Gloria and Archie’s Nativity Story by Kirsty Wyllie.

Growing up, my Christmases were filled with satsumas and stories by the fire; each of us three girls buried in our books, munching cheesy Wotsits* and peeling oranges. We grew up in a stormy household but one where books were a wonderful, secure escape and many a Christmas that is where you would find us; eating Turkish delight with the White Witch, sniffing the air for the scent of home with Badger or lost in a great adventure at Nettleford. Yes, stories, especially at Christmas are a delicious treat and should be shared. Here are a few of my favourites. I’d love to hear a few of yours.

Wind in the Willows by Kenneth Grahame

And then they heard the angels tell

'Who were the first to cry NOWELL?

Animals all, as it befell,

In the stable where they did dwell!

Joy shall be theirs in the morning!'

The voices ceased, the singers, bashful but smiling, exchanged sidelong glances, and silence succeeded—but for a moment only. Then, from up above and far away, down the tunnel they had so lately travelled was borne to their ears in a faint musical hum the sound of distant bells ringing a joyful and clangorous peal.

'Very well sung, boys!' cried the Rat heartily. 'And now come along in, all of you, and warm yourselves by the fire, and have something hot!'

Little Women by Louisa May Alcott

Jo was the first to wake in the gray dawn of Christmas morning. No stockings hung at the fireplace, and for a moment she felt as much disappointed as she did long ago, when her little sock fell down because it was crammed so full of goodies. Then she remembered her mother's promise and, slipping her hand under her pillow, drew out a little crimson-covered book. She knew it very well, for it was that beautiful old story of the best life ever lived, and Jo felt that it was a true guidebook for any pilgrim going on a long journey. She woke Meg with a "Merry Christmas," and bade her see what was under her pillow. A green-covered book appeared, with the same picture inside, and a few words written by their mother, which made their one present very precious in their eyes. Presently Beth and Amy woke to rummage and find their little books also, one dove-colored, the other blue, and all sat looking at and talking about them, while the east grew rosy with the coming day.

The Lion, the Witch and the Wardrobe by CS Lewis 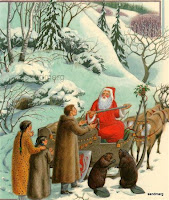 He brought out a large tray containing five cups and saucers, a bowl of lump sugar, a jug of cream and a great big teapot all sizzling and piping hot. Then he cried out “Merry Christmas! Long live the true King!” and cracked his whip, and he and the reindeer and the sledge and all were out of sight before anyone realised they had started.

8 That night, in a field near Bethlehem, shepherds were watching over their flocks. 9 Suddenly, an angel of the Lord appeared in radiant splendour before them, lighting up the field with the blazing glory of God, and the shepherds were terrified! 10 But the angel reassured them, saying, “Don’t be afraid, for I have come to bring you good news, the most joyous news the world has ever heard! And it is for everyone everywhere! 11 For today in Bethlehem a rescuer was born for you. He is the Lord Yahweh, the Messiah.12 You will recognize him by this miraculous sign: You will find a baby wrapped in strips of cloth and lying in the feeding trough!” 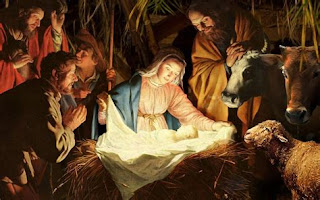 13 Then all at once in the night sky, a vast number of glorious angels appeared, the very armies of heaven! And they all praised God, singing:

14 “Glory to God in the highest realms of heaven!

For there is peace and a good hope given to the sons of men.”

15 When the choir of angels disappeared and returned to heaven, the shepherds said to one another, “Let’s go! Let’s hurry and find this Word[l] who is born in Bethlehem and see for ourselves what the Lord has revealed to us.” 16 So they hurried off and found their way to Mary and Joseph. And there was the baby, lying in a feeding trough.

*Wotsits are a cheesy, puffy snack made from the same substance as packaging material (As kids we used to eat that too!) but are particularly delicious at Christmas time.