Memories of a (Washing) Machine, by Lucy Mills 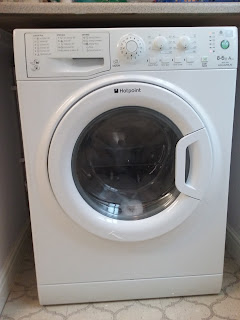 We've just replaced our washing machine.  The former one had a pretty good run; but more and more things were going wrong.

On Monday, the delivery men brought the new machine (left) and took away the old.

As they did so, I was reminded of the former washing machine's moment of fame (and trying not to look at the footprints on the hall carpet which would need treating later).

It was featured in my first 'proper' published article - in Woman Alive (my first acceptance was from Christianity, but that was published later). It was an article reflecting on the dangers of the 'Worry Machine' in our lives, and I decided to send a photograph to go with it, in case it was useful.  Cue kneeling on the kitchen floor of our former home, getting a good angle. 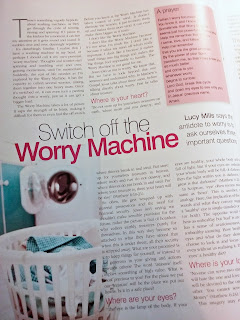 (It would be difficult to do this in our current kitchen - the washing machine is too tucked away - unless I crouched behind the downstairs loo opposite - yuk. The one above is taken in the doorway leading to said toilet.)

So as the washing machine in question was carried from the property and the new one brought in (yikes, what do they have on their shoes?!), this was the memory that was triggered.

Objects can carry strong associations for us. There are little mementoes I keep in my office for this very reason.

You may have objects that remind you of your writing life. There may also be those that inspire you to write.  For me it was that washing machine, going round and round, reminding me of the cycles of worry to which we subject ourselves.

You never know what might inspire you - or what might make you smile, one day down the line, at the memory of it.

Lucy's first book, Forgetful Heart: remembering God in a distracted world, was published in 2014 by Darton, Longman and Todd (DLT). She's written articles, poetry and prayers for various publications and is an editor at magnet magazine. www.lucy-mills.com